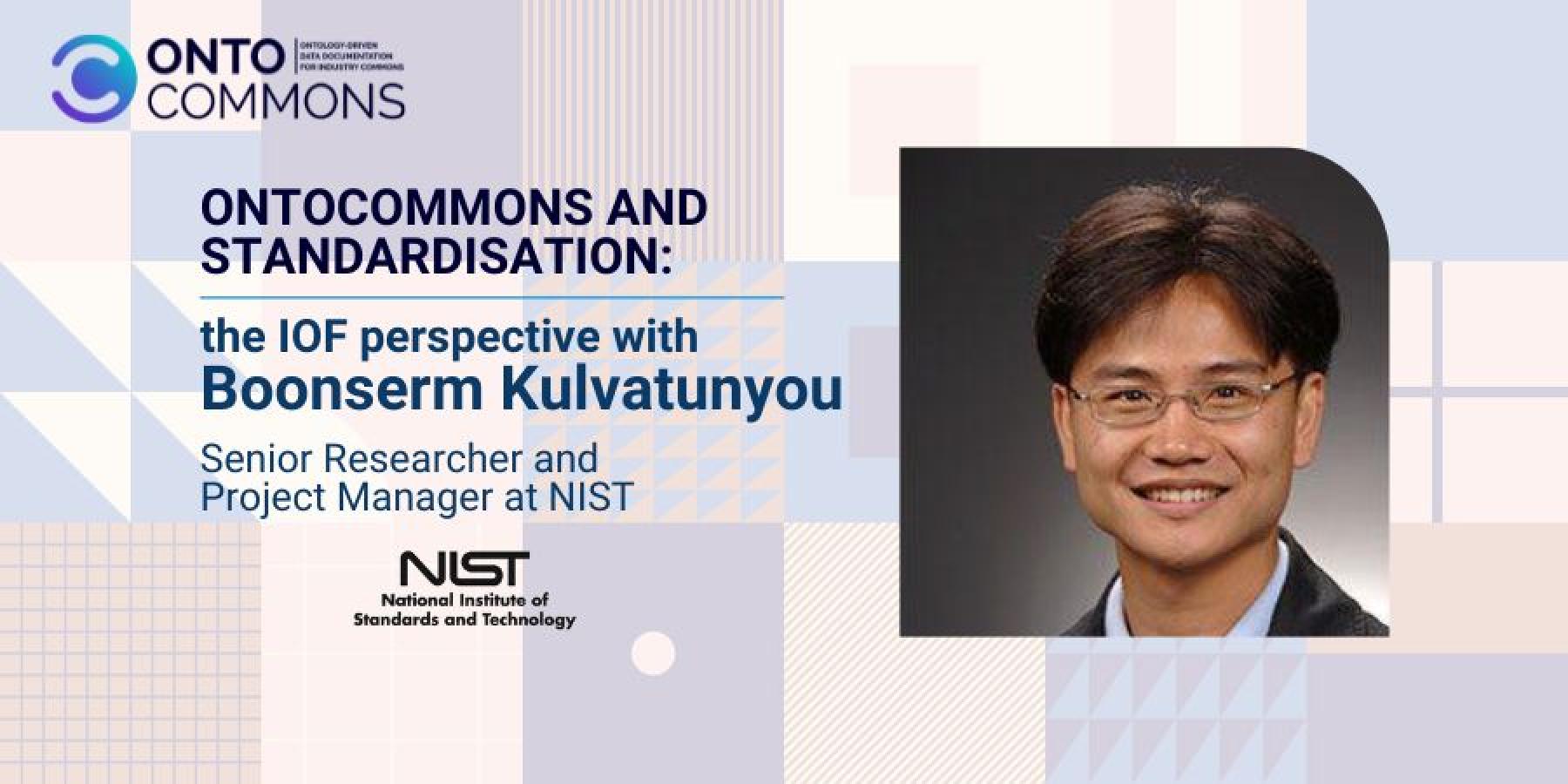 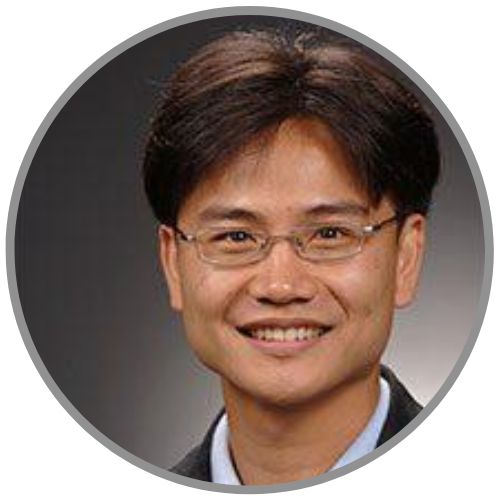 Standards and ontologies facilitate the sharing and reusing of data by increasing their interoperability. Strengthening the collaboration among EU and international standardisation initiatives in this domain is important: as different standards might assign different semantics to the same term, standards alignment, integration and conformance, through the use of ontologies, can make a real difference in getting different domains (and in particular materials and manufacturing, which are the focus of OntoCommons) to communicate and be able to exchange information, setting the basis for a common ground of understanding.

We have interviewed Boonserm Kulvatunyou, one of the OntoCommons External Advisory Board members, Senior Researcher and Project Manager at NIST, who collaborates closely with the IOF in the development of the IOF core ontology. We want to understand his take on the standardisation priorities in the industrial ecosystems, and how our project can contribute.

What do you consider to be the main priorities or challenges for standardisation related to ontologies?

“From the IOF perspective, we have just finished the development of the version one beta of the IOF core ontology, BFO-based, which is still has a limited capability. Our priority in this moment is to finalize the core ontology to reach version one. We want to be able to represent manufacturing requirements and reach the ability to represent several kinds of models, to talk about software, and the software and hardware interaction. One of the first requirements that we picked from feedback by the biopharmaceutical manufacturing industry, is the need to be able to capture real-time data from processes, but we still lack an explicit way to express quality in the Core ontology.

What we’d like, and one of the priorities identified in IOF, is to demonstrate the domain or sub-domain specific ontologies in the industrial domain, to show how people can use the Core ontology in such specialization.Of course, this also entails a number of architectural issues that need to be resolved. We can learn a lot from other industries, such as finance, however, it’s not clear that those approaches are in the best interest of manufacturing companies, which need to have more scalable implementation architecture, simpler, and whose investments can’t be as heavy as those of the finance industry.”

How can projects like OntoCommons, and the OntoCommons OCES, contribute to this?
"The challenge that we run into is having sufficient resources to advance these issues. And so, we would hope that OntoCommons comes into play by taking into consideration the IOF core needs, and allowing us to hear concerns from the rest of the communities. It is a way to be aware of, and resolve more effectively, the issues that arise while advancing the work. We are definitely looking forward to having feedback from OntoCommons and a more active participation from the OntoCommons projects members in the IOF."

From your point of view as a member of the EAB, which is the main value-add that projects like OntoCommons are bringing to the industrial community in terms of standardisation efforts in the materials and manufacturing sectors? Do you know any other projects or initiatives that contribute to standards in these areas?
"My take on this question is that it is important that OntoCommons helps industry to address the fundamental issues in ontology development and adoption: while IOF positions itself more like a Standard Develop Organisation, OntoCommons is a CSA, that will end at a certain point, but this would be a great added value, and heritage left to the community, and above all on the adoption side, since you have a set of industrial demonstrators, and it seems you are heading in that direction. It would be great to have an active participation of OntoCommons members in the IOF and in other SDOs. I’m sure that there are some architectural issues that they could contribute to. As for your question on the relevant projects or initiatives, there are other existing ongoing efforts in the pharmaceutical and biopharmaceutical manufacturing, such as NIIMBL, BioPhorum, Allotrope Foundation Ontology, which are bringing forward ontology-related initiatives, and the OBO Foundry in the biomedical domain, although it is a very distributed ontology development effort and there is no standard body to govern the OBO development. It is worth mentioning also FIBO in the finance industry. It is worth also to looking at what the NSF is doing, as they might move in that direction too. MatOnto is another ontology on the US side."

OntoCommons aims to build the OCES, the Ontology Commons Ecosystem, that provides specifications and guidelines for the methodological support to industry-targeted ontology development, maintenance and usage for documenting data. In your opinion, can it be feasible to get a standardisation recognition for the OCES? What barriers do you envisage for making a standard out of the methodologies used by the OCES a standard?

“It would be good to see how these methodologies can be used within the IOF. In terms of gaining recognition as a standard, if you're talking about ISO standards, it seems that a number of ISO standards were first developed outside ISO, and then proposed for ISO standard status. This is, of course, a long process, but I think that a good strategy would be that of having the OCES components become a standard somewhere else, first, and gain enough consensus to be then recognised in organisations such as the ISO. The IOF is actually a good example of a place to start with, being of a more private entity. A lot of ISO standards have been developed in this way. If the results of OntoCommons are proven in IOF first, I would guess that it would make it easier for those results to gain a standard status."

Moreover, OntoCommons is going to implement collaborative spaces called Focus Areas, on Cooperation on Infrastructures, Cooperation on Standardisation, Top Reference Ontology, Industrial Domain Ontologies, Demonstration, and Translator in Knowledge. These correspond to key assets of the project. Do you think the Focus Area are strategic for the OntoCommons’ success and strategic for its community?

“I think being open, and bringing that openness to the material community, is definitely important, I think the Focus Areas would provide a positive impact by stimulating consensus, which is good, and needed, in order to become a standard. But it is necessary to moderate the discussion, to have clear milestones as an output of this discussion, since different people have diverse opinions, and that can make it hard to develop a typical standard and even harder to develop an ontology.”

The OntoCommons Roadmap will include a number of recommendations for policy makers towards existing ontology and data documentation to ensure long-term relevance and implementation. In your opinion, how can this contribute to the Digital Single Market agenda?

“We need interoperability across all sorts of data set, and to harmonise the way people communicate. This Roadmap should be very helpful, also towards the Digital Single Market agenda.”

“I see in projects like OntoCommons to produce technical content or expert in the ontology standardisation and development. So, in the context of standardisation, it should become like a neutral party, that provides unbiased technical content to ensure the technical integrity of the standards and the quality of the ontology standards. In terms of the cooperation with the European Standardisation System, I think this is very important, because the goal of ontology is definitely that of having an open network of knowledge. We at NIST, on the US side, for example, would be interested in seeing what the OCES is and potentially working together to evolve this kind of systems, because I think that open standards need open source as a standard development and maintenance platform. Standards should be highly accessible and open. So, the way to support their development, should be opensource too. It is in our interest to cooperate in creating this kind of development environment. I should note being highly accessible and opensource does not necessarily mean (everything about it is) free because standards have values and it takes efforts, a lot of efforts, to develop ontology standards. There have to be a business model to sustain their development and maintenance”.

Disclaimer: The views and opinions expressed in this content/post are those of the individual and do not necessarily reflect the views or positions of the organization he/she works for.

Contributing to an open and FAIR development environment for industrial ontologies is precisely in line with our project’s objectives. OntoCommons is a CSA, started in November 2020 and going on until October 2023.

Learn more about the OntoCommons project & join our community to get involved!